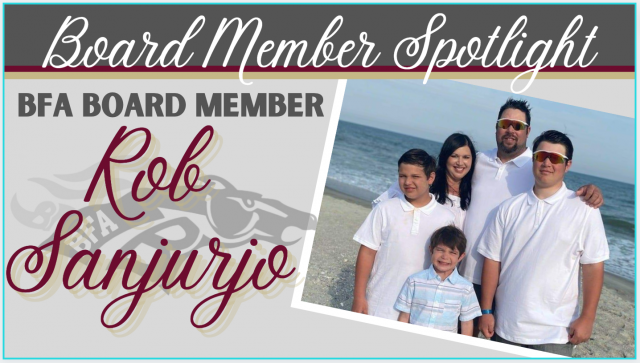 Rob Sanjurjo has lived in the Brookwood community for 8 years, dedicating those years serving on the Brookwood Football Association and the Brookwood Baseball Athletic Association Boards. During his years with BFA and BAAB, Rob has had the privilege to serve for 7 years as a Head Coach in the BFA and as a Team Manager and Head Coach of many baseball teams since 2013.

Rob grew up in Las Vegas, NV and graduated from Las Vegas High School, where he played high school baseball. He went on to play collegiate baseball in CA, where he was being recruited by the California Angels (now Los Angeles of Anaheim Angels) before he tore his labrum.

He then met and married his wife, Ereca Sanjurjo, who earned a BA from UNLV and a MAT from Sierra Nevada College. She is currently an educator in Gwinnett County Public Schools. Rob has spent the last 13 years in the sales and service industry. He is currently in the restaurant management industry. Rob and his wife have 3 children. Their oldest son, Izaiah (13) is an upcoming Freshman who has played football with the BFA since 6 years old and also baseball at BAAB. He currently plays travel baseball. Their middle son, Kingsley (11), also enjoys playing football and baseball in the Brookwood community. Their youngest son, Kellan (6) started his first season of baseball at BAAB and couldn't be more excited to play sports just like his big brothers and daddy!

When Rob has free time, he and his family enjoy beach trips, fishing at the lake, traveling, concerts, and attending lots of sporting events! Rob is a proud member of the Brookwood Broncos community!